The archaeology of the region around the small town of Pinhal da Serra in the state of Rio Grande do Sul has many of the characteristics of Jê culture found elsewhere in the highlands. The most distinctive types of sites associated with this archaeological culture are all found in great density around Pinhal da Serra:
ceremonial and domestic earthworks (mound and enclosure complexes, pit-house settlements) and surface lithoceramic sites. However, within this broad similarity insettlement patterns, are a range of interesting and potentially unique regional variations.

At the regional level, the Jê occupation at Pinhal da Serra reveals a highly structured built landscape. Small territories appear to be constituted by clusters of sites, revolving around well-planned pit-house villages and mound and enclosure complexes placed at the immediate vicinity of the settlements.

The living and the dead At the settlement level, the detailed examination of pit-house sites in Pinhal da Serra also shows some particularities. In comparison with other regions in the highlands, where some pit-houses can exceed 20 m in diameter and 3 m in depth, the pit-houses around Pinhal da Serra are not particularly large. Neither are they found as part of the extensive settlements that, in some parts of the highlands, can count from 40 to more than 100 houses. Instead, what marks them out as distinct is that they are often found in small clustered units, set within clearly defined terraced areas and with evidence of well-worn track-ways between the structures, suggesting well-regulated cycles of movement by the communities that inhabited these settlements and a certain degree of permanence at them, contradicting previously held views of Jê communities as essentially mobile. The evidence from the settlements in Pinhal da Serra has consequences for our understanding of labour coordination and community organisation in the context of emerging village life of the Jê culture.

The pit-house settlements are usually located on the slopes of basalt plateaus, on the top of which mound and enclosure complexes are frequently found. It is possible to interpret these sites as village cemeteries, but the small number of burial mounds, and the fact that only one or two burials are normally found in them suggests that not all individuals received this treatment. Since most mound and enclosure complexes are set in pairs, an analogy can be proposed with the historically recorded moiety system of the Jê peoples, and maybe the prehistoric sites are burial grounds for moiety leaders of the neighbouring villages.

Sometimes, however, mound and enclosure complexes can be found in large numbers.At the Avelino plateau they were found to have been set out of long distances on notable linear alignments with each other and a single pit-house in the centre of the plateau, which has interesting analogies with the project’s current work at the Abreu and Garcia plateau near Campo Belo do Sul. At the same plateau, a large enclosure with 80 m of diameter has also been mapped. Unlike small burial sites, these large enclosures, which are rarer, might have been gathering places for a large group, possibly for community rituals – for instance, the initiation rituals witnessed in the historical period. Evidence has also been recorded of significant change in the form of the mound and enclosure complexes, so far only attested in this region. Traditional circular enclosures are elaborated by the addition of  rectilinear forms as at the Posto Fiscal and RS-PE-31 sites. This reveals a progressive complexification of ritual architecture and probably ideological changes in later periods. Overall, the Jê sites in Pinhal da Serra attest a complex ceremonial landscape where communities integrated at different scales. 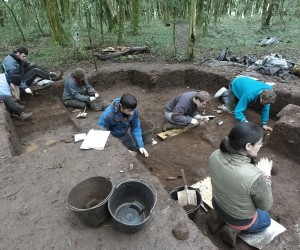 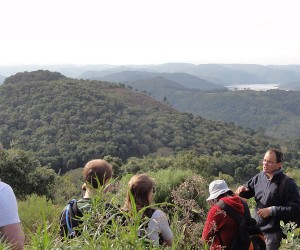 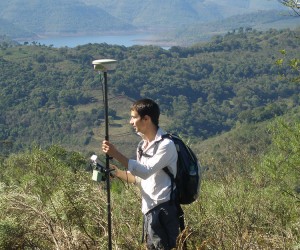 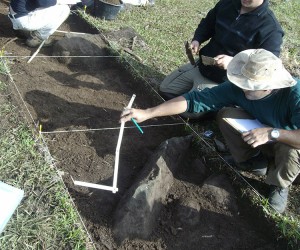